If you’re eager to tone your arms with a set of dumbbells, look no further. This article provides several exercises for the best dumbbell arm workout that are simple, quick, yet incredibly effective.

That’s right! You don’t need a gym full of equipment for a better body, just a pair of dumbbells and 10 – 15 minutes a day. 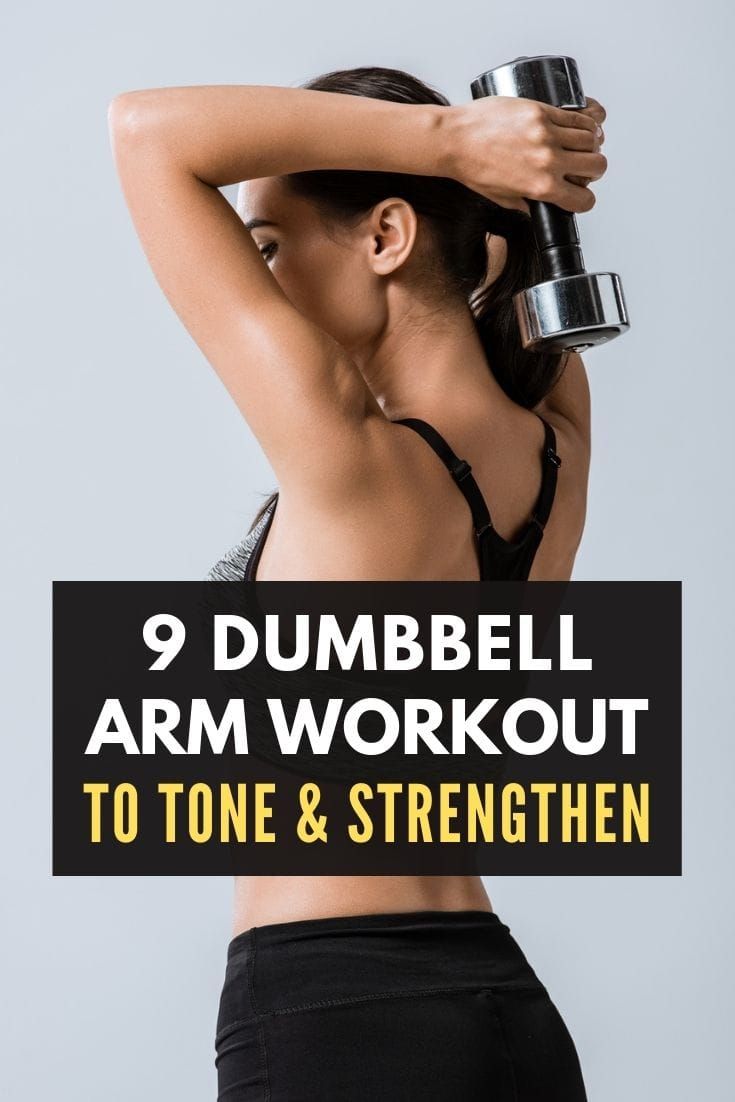 Keep the elbows pressed to the sides, then slowly curl the dumbbells up while engaging your biceps. Squeeze the biceps when the weights are at the top.

After that, lower them back to the starting position. That counts as one repetition.

Try not to swing the dumbbells from one side to another or up and down for the best result.

The bicep curl is the most effective and fastest way to build muscles in your biceps.

Grab onto the dumbbells with both hands, keep the elbows and your core nice and tight.

Squeeze the glute to ensure that you’re keeping the proper form and tightness throughout the exercise. This stand will be your starting position. You can stand up or sit on the bench

Now, extend your arms overhead, then press the weights together. With the upper arms parallel to each other, bend the elbows to lower the weights behind your head.

Raise your forearms back up to fully extend your arms, then drop them back to the initial position. That counts as one rep.

Stand with your feet hip-width, hands holding a pair of dumbells, and keep your arms straight.

Remember, always engage your core while doing these exercises. Now, row up the dumbbells by raising both elbows until they reach chest height.

Slowly lower them back to start, and that counts as a rep.

A military press can be done either seated or stood up.

Sit on a chair with your spiral straight, core engaged, or stand with feet hip-width.

With both hands holding dumbbells, press them up above your head until both arms are fully extended, hold for a moment.

Then slowly lower the weights back to the initial posture.

The tricep kickback is an excellent exercise for toning and strengthening your triceps.

To start, lean forward slightly from your hips, keeping your spiral firm and straight.

Grab a pair of dumbbells on both sides with the elbows slightly bent and pressed to your rib cage; it is best to make a 90-degree angle at the elbow joints.

Raise the weights to the back until your arms are parallel with the floor; don’t forget to exhale as you do so.

Pause a bit, then lower the forearm back to start. That’s one rep.

Just like the tricep kickback exercise, you’re going to bend forward a bit with this one.

However, instead of having your elbows pressed to the sides, keep your arms fully extended with a light dumbbell in each hand.

Raise the weights to shoulder height using your entire arms; try to engage your shoulder muscles as much as possible.

Lower the dumbbells back to the starting position, and that counts as one rep.

A lateral raise is a great workout for your shoulders and triceps.

You can either stand up straight or sit on a chair to perform this exercise, whichever makes you comfortable.

But remember always to keep a straight posture and engage your core.

With a dumbbell in each hand and elbows slightly bent, raise the weights to the sides, so your hands face each other and your arms align.

Pause for a moment, lower the arms back down.

Stand straight while holding two dumbbells in both hands, palms facing your stomach.

Keep your chest up and back straight, start by raising the weights in front of you to shoulder height.

Pause for a bit, then lower them back down.

The front raise has a direct impact on your shoulders’ front muscles, which not only predominantly strengthens your shoulders but also makes your collarbone more prominent.

The traditional way to do a chest fly is to lay flat on the ground or an incline bench.

There is also a standing variation if you’re already familiar with the old-school way and eager to try something new.

To start, lie flat on your back on any flat surface, the ground, or an incline bench.

You will remain in this position the whole process of this exercise.

Hold onto a pair of dumbbells with two hands; make sure your arms are parallel with the ground and palms facing up.

Lift both of your arms so they’re horizontal to the ground, elbows slightly bent.

Then, slowly lower the dumbbells to the initial position, holding them in line with the chest.

These exercises are pretty much all you need for toned and strengthened arms.

When you exercise often, not only will your body be in better shape but your mood will significantly improve as well, boosting your mental health in the long run.

Remember, the most important thing to successfully get in better shape with a pair of dumbbells is to have the right posture.

Most of the aforementioned exercises require you to have a straight back the entire time.

Plus, try to avoid lifting weights that are too heavy. You might feel like they’re not that heavy until you do 1 – 2 reps and start to regret your decision.

Remember, baby steps but consistent is many times better than heavy weights that lead to bad posture.